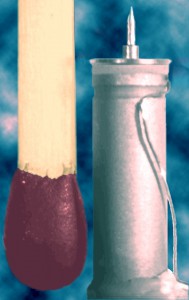 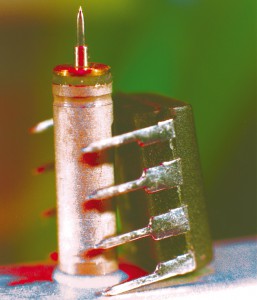 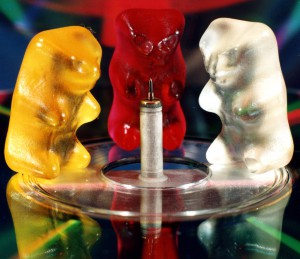 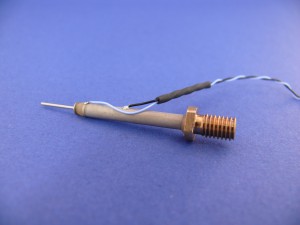 The basis of Nanotechnology is micro- or nano positioning. Piezoelectric crystals achieve high resolution down to the atomic scale. The drawback of this technique is the limited stroke of only a few µm.
This drawback is overcome by the patented Nanomotor®: It has a positioning stroke of up to more than a centimeter while operating with atomic resolution. The Nanomotor thus bridges eight orders of magnitude.
The Nanomotor is a linear motor consisting of a cylindrical housing and a slider with a free axial hole inside. It combines high resolution in the sub – nanometer range with a large positioning stroke. The Nanomotor utilizes a piezo tube for fine positioning and a pulse wave produced by the same piezo tube for coarse movements.
The small Nanomotor is half the size of a match stick. It can lift six times its own mass. Every point of its stroke can be reached with a speed of up to 2 mm/s. The Nanomotor also works in ultrahigh vacuum or in liquid Helium. It is driven by our Network Controller. The Nanomotor is available in three different versions (see below).
In its free axial hole the Nanomotor can transport a tip, a hose, an electrode, a hypodermic needle, a glass fiber, or even a micro gripper.